A vintage promotional Disneyland photo, circa 1960. 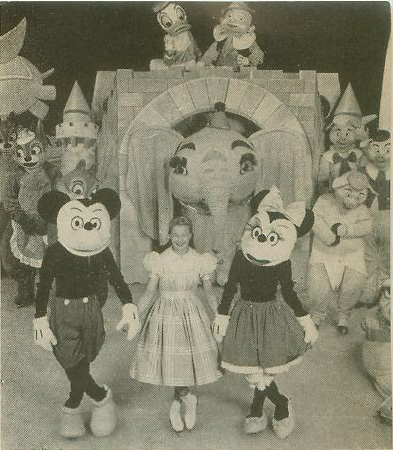 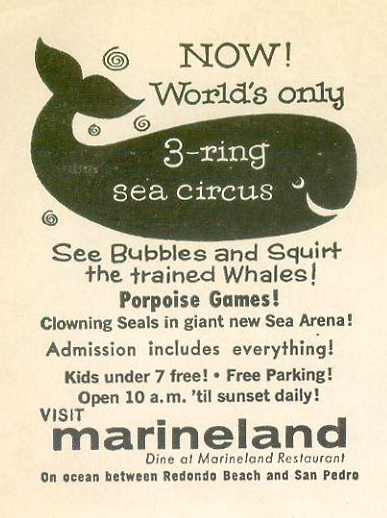 Circa 1960s, this is the paper wrap that went over your drinking glass in a hotel or motel. When I grabbed this from the china hutch at that estate, I thought the original glass was still in it; but it turns out there was some powdery stuff the husband thinks was “some sort of ash from a volcano” — “like from Hawaii or something.” OK. But since I accidentally dumped most of it on my floor in my ignorance to its existence… The vacuum got it. 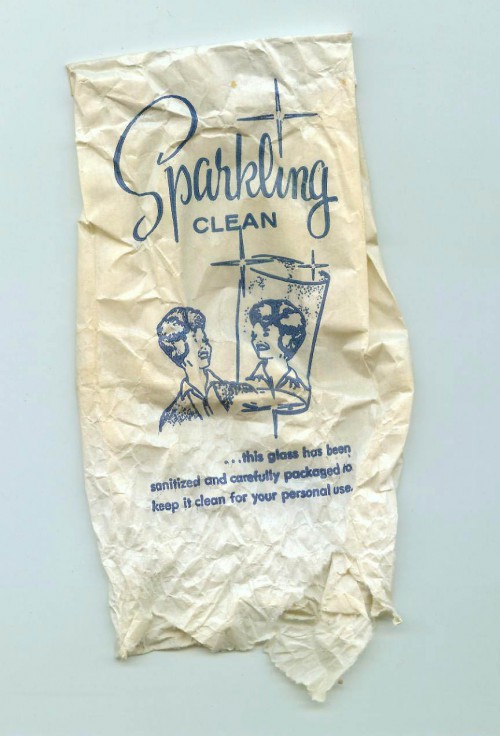 Kitschy vintage salt and pepper shakers, souvenirs from Gooseberry Falls. One in the shape of a safe, the other a golden moneybag, it may have some political statement when the rise of tourism in the 1920s created a concern that the area would be accessible only to the rich. 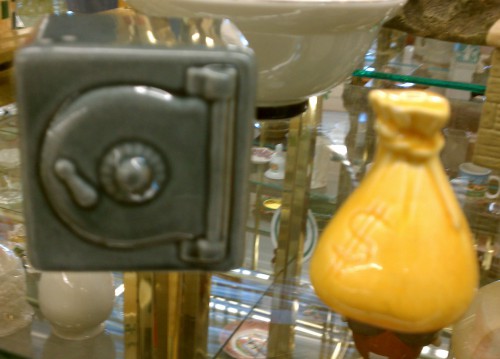 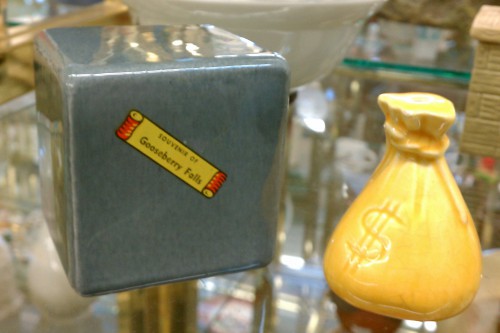 . I didn’t find any concrete evidence (even when asking my casino-knowing pals; if you know anything, please do tell!), but why waste the info I did find? 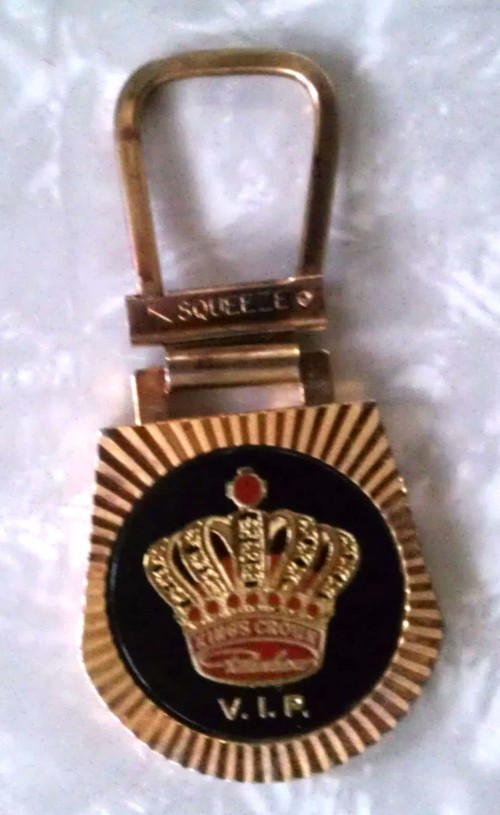 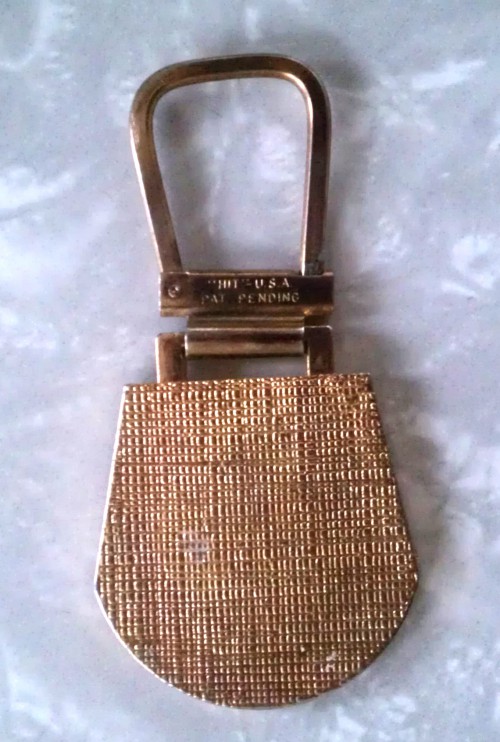 The old King’s Crown casino was the second name of the original Aladdin, located at 3667 Las Vegas Boulevard South. The property originally opened in 1963 as the English Tallyho Motel. It was built in 1962 by Edwin Lowe, inventor of Yahtzee, who was going to prove that a resort motel without a casino could be successful. It wasn’t and the Tally-Ho became the King’s Crown (or the King’s Crown tally-Ho) in 1964. The King’s Crown was dethroned after just six months when it was denied a gaming license.

Milton Prell then purchased the property, and created the Aladdin casino, which opened on March 31, 1966. 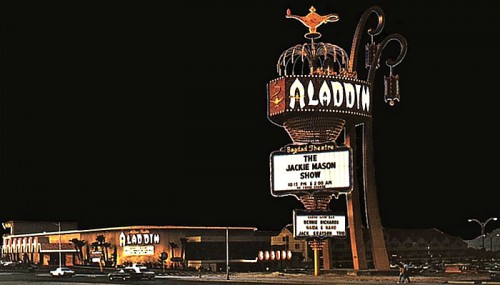 Along with the legendary kitsch design, the Aladdin is probably most famous for hosting the wedding of Elvis & Priscilla Presley on May 1, 1967. 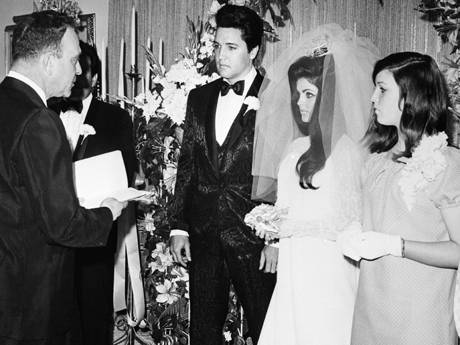 And the fact that the casino property has had a lot of problems; a lot of owners.

In 1969, Parvin Dohrmann Corporation took over the Aladdin, and in 1972, using the name Recrion Corporation, sold it to Sam Diamond, St. Louis politicians Peter Webbe and Sorkis Webbe, and St. Louis attorney Richard L. Daly. The resort was sold to Wayne Newton and Ed Torres in 1980; Newton sold off his share to Torres within two years. In 1984, the Aladdin went into Chapter 11 bankruptcy. In 1987, Japanese businessman Ginji Yasuda purchased the Aladdin, but state regulators stepped in, removing Yasuda and putting the resort in Chapter 11 bankruptcy in September 1988. In 1994, Jack Sommer and the Sommer Family Trust purchased the hotel, only to close it on November 25, 1997. And the old Aladdin was imploded in 1998.

Sommer took on London Clubs International as a partner and a new Aladdin re-opened, late, in 2000. But it was sold in bankruptcy on June 20, 2003 to a partnership of Planet Hollywood and Starwood Hotels & Resorts Worldwide.

A more complete story of the Aladdin, aka The Vegas Jinx, can be found here.

You’ve seen the old classic t-shirts making fun of a family member going somewhere and only bringing back a lousy tee-shirt (which brings to mind this great twist on the joke), but you may not laugh at the shirts after seeing this gem. 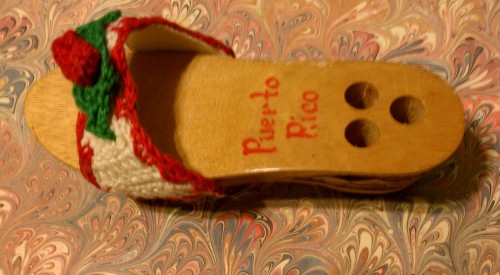 A small wooden shoe or sandal, with a crocheted vamp, marked “Puerto Rico”. Perhaps an odd little souvenir, especially with a trio of holes (presumably to hold pencils?), but the real kicker is the sicker on the bottom… Made in the Philippines. 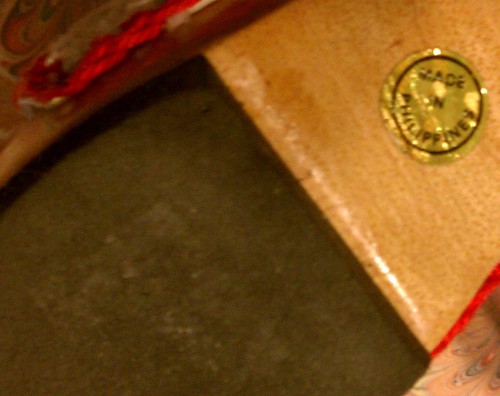 The fun-tastic photos of the Enchanted Forest at Clarkland Farm from Lucinda Lunacy have me itching to take a family vacation… Located in Ellicott City, Maryland, the theme-park-slash-petting-zoo will open on Saturday, March 31, for the 2012 season. 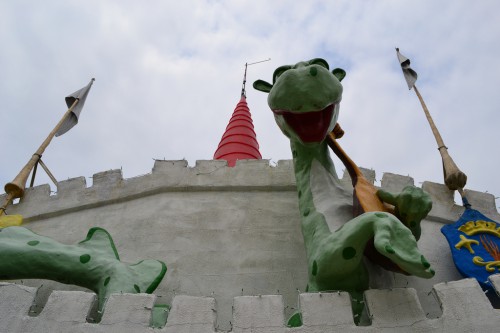 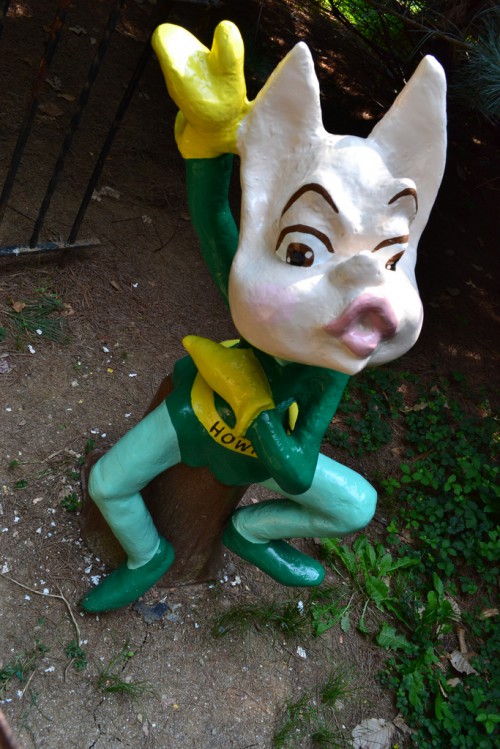 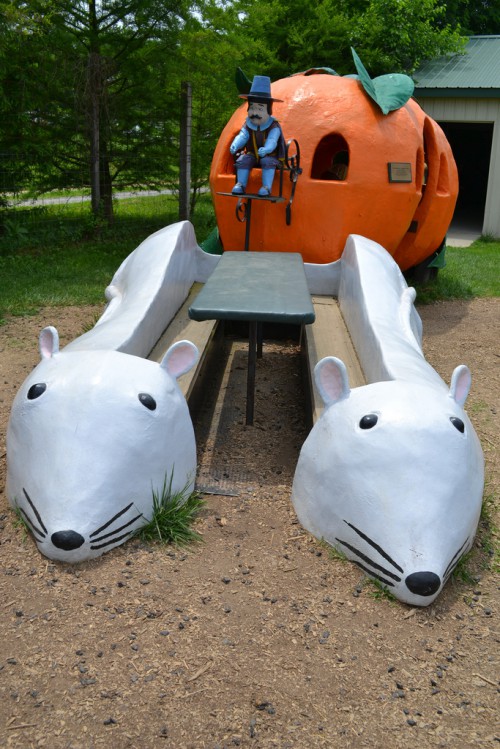 Remember back, when the Internet was young, and the most fascinating thing was to search for the exotic… Finding pages published by people far away from you, on subjects and things you’d never heard of before. Now, one of the most important things is to find things right in your own backyard. Things you know about — enough to want, anyway. If the price is right. Things you want, and at the best price; thanks, Internet.

Sure, some of the exotic thrills are still a large part of our daily Internet use. But beyond the entertainment and educational value, so much of our time is now spent comparison shopping — and we seek the added bonus of supporting our local economies. Well, maybe it’s just the convenience of saving on shipping combined with the instant gratification of a local pickup. Tomato, tomatoe; the results are the same.

I was tooling about such a place, www.CentrSource.ca, “Things you love, where you live.” Unexpectedly, however, I found myself discovering the delightful Kitsch Hotel, a youth hostel in Lisbon, Portugal. It’s not near home, but it is a thrifty way to travel. And it’s loaded with kitsch! 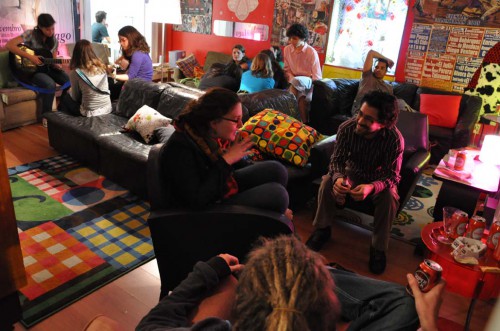 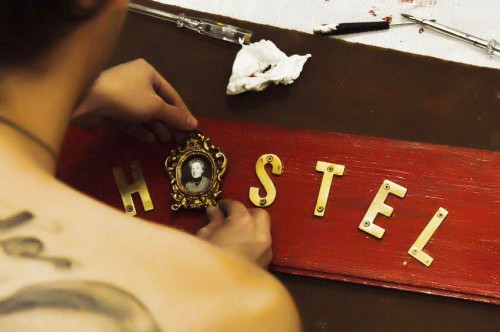 Photos via The Kitsch Hostel Blog. A number of clever ideas seen here sent me back to CentrSource for project supplies. …Ah, the circle of kitsch. 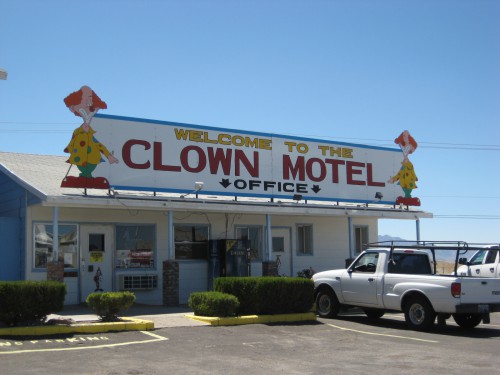 She also notes the following:

I realize that clowns make some people uneasy & that’s ok. I’m not judging. If you can’t handle looking at clowns, there is always the cemetery across the parking lot.

I’ve posted lots of ads and information from this antique Japan travel guide, but I had to share this pair of advertisements from Pope & Co., who don’t want you to go hungry! I guess their solution is for you to be good and drunk on trips to the interior. I guess numb will keep you dumb to your hunger, so drink up the champagne, the whiskey and the beer! And cigars; smoke ’em if you got ’em — and if you don’t have them, buy them from Pope & Co. 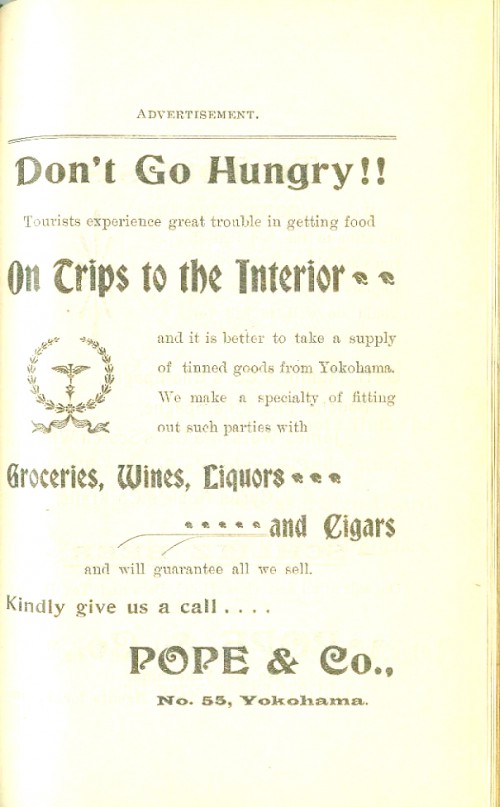 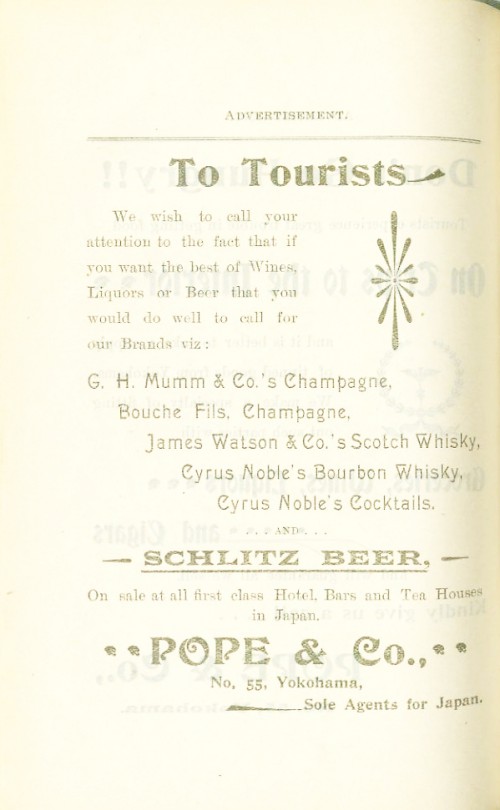