While researching miniature toy maker Charles Hall, I stumbled into the following gems at this toy soldier collecting site:

You’d be forgiven for thinking that this was a member of the Ku Klux Klan! In fact it’s 54mm plastic figure of a hooded penitent from a holy week procession. Made is Spain but maker unknown, probably sold as a souvenier to raise funds for charity rather than a toy.

Would you believe this came from a nativity set? made by OLIVER of Spain. 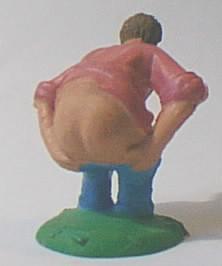