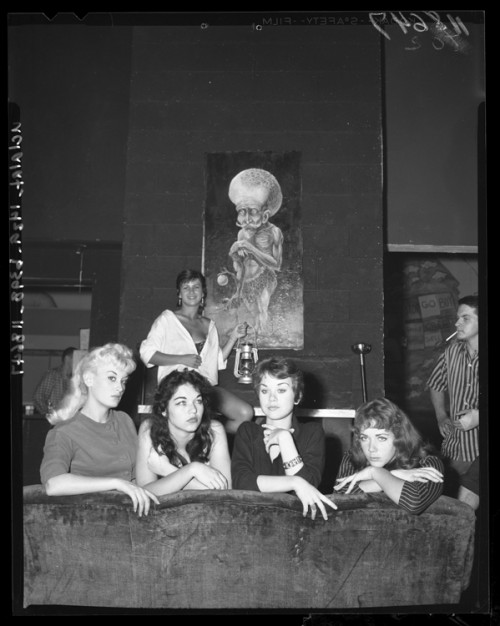 Don’t they look like they’re enjoying themselves?  These perky, cheerful ladies were just a few of the candidates vying for Miss Beatnik 1959, in this photo from the LA Times.   The ladies are, from left to right, Michi Monteef, Sammy McCord, Patti McCrory, Shaunna Lea, and Inner Thigh McGee there in the back is Jan Vandaveer.  They won’t smile or acknowledge the camera (except for Jan, but that’s why they made her stand in the back) because they really want you to know how serious being a Beatnik is — so serious, in fact, that this Beatnik contest was disavowed by Lawrence Lipton and his Beatnik colony.  See, this Miss Beatnik contest was sponsored by the Venice Art Committee, started by John Gifford and Tony Landreau, who were seeking publicity for their organization — which means, in Lipton’s words, they were merely “hip squares…taking advantage of the Beatnik movement.”  Real beatniks don’t do publicity stills, see?  Well, unless you’re a Greenwich Village beatnik, because they held their own Miss Beatnik contests in 1959 and 1960, but they were mocking the Miss America contest so that makes it totally Beanik.   The 1960 news article even mentions Miss Chicago Beatnik, Gnomi Gross, who went all the way to Greenwich Village to Beatnik all over those hep cats the way only a Windy City Beatnik could.  Hopefully the four ladies in the Venice Beach Miss Beatnik contest were able to rise above their unBeatnik ways and truly become the disaffected postmodern iconoclasts each one hoped she could always be.